This has kicked up quite the storm…Hervé Léger’s ‘bandage dress’. The infamous bandage style bodycon. The former Hervé Léger exec caused quite the stir with his comments to The Mail on Sunday, speaking openly about who he thought should and should not wear the dress.

As you can only imagine, this did not go down to well. Even going so far as to add that “If you’re a committed lesbian and you are wearing trousers all your life, you won’t buy a Herve Leger dress. Lesbians would want to be rather butch and leisurely.”

The Pre-Fall 2015 #HerveLeger Signature Capsule collection is sensuous, exclusive and unforgettable. Here’s a glimpse of the sculpting silhouettes rich compelling tones and couture details. Shop Pre-Fall via link in bio.

“Voluptuous women and those with very prominent hips and a very flat chest” should not wear the bandage dress. The very first bandage dress appeared in the 80s and since then has it graced many a red carpet. A-Listers such as, Victoria Beckham, Rihanna, Kate Winslet and Caitlyn Jenner are big fans of this classic and very tight fitting bodycon. But now the question is (and assuming these celebs themselves?!)…was Patrick Couderc happy with it? I guess we’ll never know.

Who shouldn not wear the dress according to Patrick Couderc;

– Certainly not women that are considered over the hill. “You should not display everything like you’re 23.’ So according to Couderc that is most of us past it then.

– Don’t wear underwear that is too small. ‘The knicker line cuts through the flesh and goes through the other side of the dress,’ creating an unattractive ‘visible panty line’. Ok, so, go commando?

– Don’t wear if you’ve had plastic surgery. He shared his thoughts openly when asked about Katie Price wearing Herve Leger dresses to show off her…assets.

Finally, if that wasn’t enough to get your cage rattled, Couderc shared his opinion on hoisery (of course drawing from his own experience). We have to wonder if he shared his thoughts so oenly with these women he took on dinner dates or whether that was just for the interview.

‘Whoever was wearing tights was working in a private office in a bank in St James’s and whoever was not wearing tights was coming to work as a shampooist in a High Street hairdresser, commuting from Croydon.” Clearly this comment had to do with class and heriarchy, again suggesting that you had to be of a certain class to wear one of these dresses. Just in case there was any doubt about that last point, he cleared that up in the interview as well, saying he would much rather “people with expertise” wear his dresses. 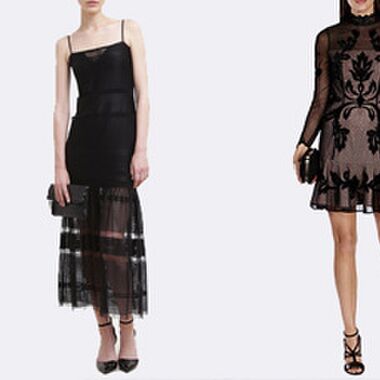